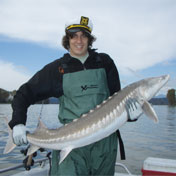 The most popular and consistent fishery of the Fraser Valley, throughout the course of the year is for White Sturgeon. Ranging in length from 2ft to 12ft, you never know what's biting at the end of your line. With the average size being around 4ft., these fish provide a lot of fun and excitement. With their thumb burning capability, and their acrobatics, these prehistoric fish truly are a one of a kind. The Fraser, Harrison and Pitt Rivers provide world class Sturgeon fishing opportunities. We fish for Sturgeon out of our comfy jet boats, with a set line, and a bait of choice, depending on the time of the year. Peak times are March 15th to May 10th, and again from July 15th to November 15th. However, they can be caught year round. A Sturgeon fishing adventure is a must do for the hard core, as much as it is for a family day on the water. 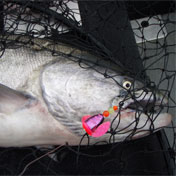 The second most lasting fishing season in the Fraser Valley is for the Chinook (King) salmon. These fish range from 10 to 50lbs. The Chinook season starts in June and ends in November. Most often we target these strong, thumb burning fish in the main stem Fraser River, Harrison River or the mouths of some of the other tributary rivers. The most common methods used for catching the largest of the Pacific species of salmon are bar fishing, or plunking with spin-n-glows and/or cured salmon eggs. We fish either out of our boats or from shore. At times drift fishing with roe or spoon casting can also be productive. 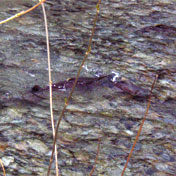 The Coho is probably the most acrobatic specie of the Pacific Salmon. Even though we still target them, the numbers of returning fish are not as good as they once were. On a very good day a few fish can be hooked. Coho can be targeted many different ways. These include: bar fishing, spoon casting, drift fishing, fly fishing, and spoon/spinner casting.

It is a known fact the Sockeye salmon migrating through the Fraser River to their spawning grounds for the most part do not bite. Most of the fish are hooked through the outside of the mouth by a method called bottom bouncing or flossing.

Please note, we will not bottom bounce if a request is made by DFO not to do so. However, there are other systems in the area where staging sockeye can be sport caught. 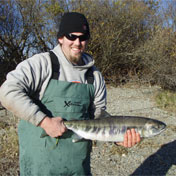 The Fraser Valley Chum season runs from October to November. During these two months, they are the most plentiful salmon. They're quite easy to catch, and provide a lot of excitement. Most of the time we target Chum Salmon in the main stem Fraser River, Harrison River or the Stave River. Some of the ways we target these fish are bar fishing, float fishing with wool/jigs and fly fishing. The one draw back of the chum is they color up the fastest with their famous stripes. Even a fish that's been in the river only a few days has color to it, and in the past has been frowned upon by most anglers. However, pound for pound these are some of the strongest fighters.

The Pink salmon migrate through the Fraser River and its tributaries every other (odd) year. Even though they're the smallest of the Pacific Salmon family, they provide a lot of fun on light gear. We use either light spinning tackle, drift gear, or fly. On many of days, a good fly angler can hook many of dozens of these feisty fish. 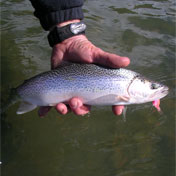 The Fraser Valley trout fishing scene also isn't what it once was. Even though Cutthroat Trout can still be fund in some of Fraser's back waters and tributaries throughout the winter months and when the salmon fry hatch, it's a real hit or miss. Locally we do not guide for cutthroat, but on occasion will tie into one as by-catch. However, we do have some true wilderness haunts where wild cutthroat up to 3lbs. can still be caught consistently. 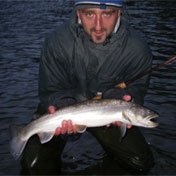 Bull Trout and/or Dolly Varden can be found in some of the local waters during different times of the year. It's not a super consistent fishery, but it can have its days. This is something to think about on an extended trip, for a change of pace. These fish can be quite easily persuaded drift fishing, spoon fishing or on the fly. Once again, we do fish for Char up to 8lbs. in some magnificent waters out of the beaten path.